The Second Mother tells the story of Val (Regina Casé)—a hard-working live-in housekeeper in modern day Sao Paulo. Val takes care of all her wealthy employers’ needs and asks no questions. But when Val’s estranged daughter Jessica suddenly shows up in Sao Paolo the unspoken but deep-rooted class barriers within the home are thrown into disarray. The Second Mother won the Special Jury Prize for Acting at the Sundance Film Festival and the Audience Award at the Berlin Film Festival, both in 2015. 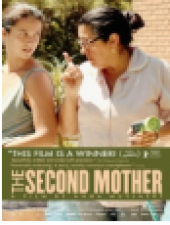