When a woman returns to Uruguay—the stage for her tragic past—her conscience is painfully torn between the political and the personal. Will she move past her haunted history and live peacefully as a mother and grandmother, or face her demons by joining a lawsuit on behalf of women who were sexually abused during the country's reign of dictatorship? Featuring stunning performances by Cecilia Roth and Justina Bustos, Migas de Pan was Uruguay’s 2017 Academy Award submission for best foreign film. 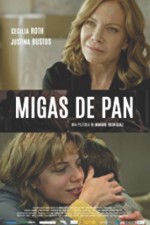