THE INFILTRATORS is a docu-thriller that tells the true story of young immigrants who are detained by Border Patrol and thrown into a shadowy for-profit detention center—on purpose. Marco and Viri are members of the National Immigrant Youth Alliance, a group of radical DREAMers who are on a mission to stop unjust deportations. And the best place to stop deportations, they believe, is in detention. However, when Marco and Viri attempt adaring reverse ‘prison break,’ things don’t go according to plan. The infiltrators has won multiple awards, including the Audience Award and the NEXT innovator Award at the Sundance Film Festival, among others. Q&A with the filmmakers after the screening. 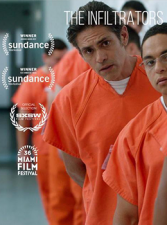