"Ixcanul" by Jayro Bustamante won the award for debut film at the Berlin Film Festival and is Guatemala's first Oscar submission. The film tells the story of Maria (María Mercedes Coroy) who is set to marry a much older foreman at the coffee plantation. However, when she learns she is pregnant from another man, she must make many hard decisions. 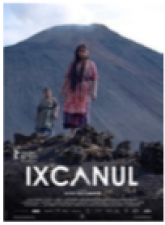